If just hearing names like Rockefeller, Astor, Morgan, Vanderbilt and Macy make you long to travel backwards to a more elegant time, you’ll love Jekyll Island. This small island off the Georgia coast was once home of the famous “Millionaires Club” where some society’s wealthiest families spent their winter months.

Back then, the Island was accessible only by boat–or yacht, as it were–though today there is a causeway for easier access. The Jekyll Island Club’s initial group of 53
members/investors included people like Marshall Field, Henry Hyde, J.P. Morgan,
Joseph Pulitzer and William K. Vanderbilt. The Queen Anne style Clubhouse first
opened its doors in 1888 and members competed to see who would arrive in the
biggest yacht.

The hotel’s rich history captivated me and inspired my Christmas novella, The Christmas Gift, so I set Will and Sophie’s story on Jekyll Island. I used a bit of creative license since the season generally began after Christmas, but 1942 was in fact, the Club’s last official season.

Today the Jekyll Island Club is a historic hotel and it’s no less impressive than it was then. Rich paneling, high ceilings, elegant antiques. It’s hard not to gawk. You feel glamorous just walking down the thick runners carpeting the halls. (For more on the hotel, go to http://www.jekyllclub.com/) 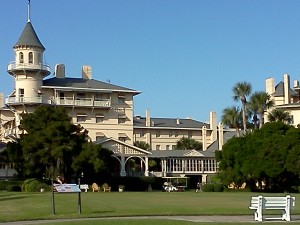 If you visit the Island, be sure to cruise past the other “Cottages” built by the club members. Their definition of “Cottage” was clearly different than mine. These are mansions, pure and simple. Instead of walking or driving, you can rent a bicycle or take a horse drawn carriage tour past the homes. The Jekyll Island  Museum also offers a guided tram tour.

On the north end of the island, not far from the fishing pier is Driftwood Beach,
one of my favorite places on Jekyll. We headed there out of curiosity and found
a lovely, unspoiled (though windy!) corner of the island to explore. 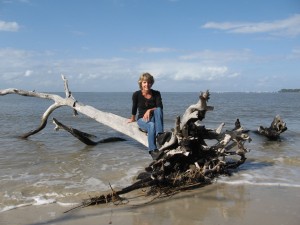 There are other hotels on Jekyll Island, some right on the beach, and there are myriad things to do, from shopping in the historic district, visiting the Georgia Sea Turtle Center and the Jekyll Island Museum, to playing at the water park in the summer. For more info, go to: http://www.jekyllisland.com/Home.aspx

Whether real or virtual, enjoy your visit to the “Gilded Age.”