I don’t like conflict. Hate it, actually, and have tried to live by the biblical precept, “If it is possible, as far as it depends on you, live at peace with everyone.” (Romans 12:18 NIV) But lately, I’ve realized that avoiding conflict is not always the answer. Sometimes, we have to stand up and speak out.

My maternal grandparents immigrated to America with their family after WWII, arriving with nothing but a couple of suitcases and the hope of a better life. Early in the war, they refused to let their children be part of the Hitler Youth, and it cost them their business. Later, they were displaced from their home, separated by circumstance, forced to scavenge for food and ultimately reunited with the help of the Red Cross.

My grandfather was vocal about his love for America and considered his citizenship a great treasure. He always said, “America took us in and gave us a new life.” He lived in this country for 40+ years, but spoke broken English until the day he died. It wasn’t for lack of trying; there were just certain sounds, like the “th,” he couldn’t force his mouth to make. But he displayed the American flag on his car and his favorite ball cap pictured an American flag. He proudly displayed Old Glory outside his home on every patriotic occasion.

His appreciation and example helped instill in me a love of America—and reminded me never to take it for granted. 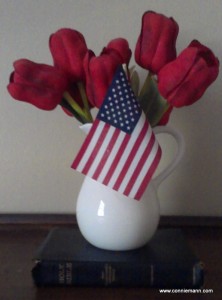 Today, I’m frightened by how far our great country and its leaders have strayed from the foundation on which it was built. I can hear the ground crumbling as we’ve moved from solid moral principles to the shifting sands of public opinion and political correctness.

I can’t keep silent any more. This is my country, land that I love!

Take a minute to read these words from America’s founding fathers. May they wake us from our complacency and remind us of our responsibility as citizens—and of what is at stake if we do nothing.

We have been the recipients of the choicest bounties of heaven. We have been preserved, these many years, in peace and prosperity. We have grown in numbers, wealth and power, as no other nation has ever grown. But we have forgotten God. We have forgotten the gracious hand which preserved us in peace, and multiplied and enriched and strengthened us; and we have vainly imagined, in the deceitfulness of our hearts, that all these blessings were produced by some superior wisdom and virtue of our own. Intoxicated with unbroken success, we have become too self-sufficient to feel the necessity of redeeming and preserving grace, too proud to pray to the God that made us! It behooves us, then to humble ourselves before the offended Power, to confess our national sins, and to pray for clemency and forgiveness.
Abraham Lincoln – Proclamation for a National Day of Fasting

If a republican government fails to secure public prosperity and happiness, it must be because the citizens neglect the divine commands, and elect bad men to make and administer the laws.
Noah Webster

Those people who will not be governed by God will be ruled by tyrants.
William Penn

Those who expect to reap the blessings of freedom, must, like men, undergo the fatigue of supporting it.
Thomas Paine

To sin by silence when they should protest makes cowards of men.
Abraham Lincoln

May God Bless America—and give us the courage to speak up for this Land of the Free and Home of the Brave.