Get an Otter Attitude

Sometimes life can get a little, well…crazy. One task after another on a crowded to-do list and suddenly…you realize you’re Jack. You know him, the all-work-and-no-play guy which makes Jack—or in this case, Connie—a dull girl. My plate has been stacked so high lately, the pile looks like something out of a cartoon—the whole thing wobbles precariously, threatening to spew responsibilities and details all over the place. There I am staggering underneath it all like a frantic circus clown, desperately trying to keep the whole thing from falling on my head.

Ever been there?? So what’s a busy woman to do?

I hit the “enough is enough” point the other day and came up with a few ideas:

This one has saved my sanity more than once. Grab a piece of paper and divide it into two columns. The first is called: Things I control. Title the other one: Things I DON’T control. Now put everything on your to-do or to-worry pile on one of the two lists. Then sit back and take a deep breath. See…you’re only in charge of one list. Let those in charge of the other list have at it. (Sometimes, ahem, the other list is God’s. He’d rather not share.)

I think it’s fairly impossible to watch an otter play and not smile. Or at least, relax. They are so playful and fun to watch. (We saw this little guy at the Florida Aquarium last weekend.) 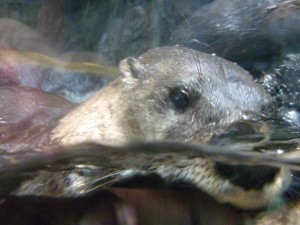 When life gets too serious or too overwhelming, it’s time to add a little bit of fun back into your life—even if it’s just for a little while. Tickle a child until they giggle. Romp around with a puppy or kitten—even if you go to the pet shop or animal shelter to do it. Rediscover the pure joy of living in the moment. By watching the carefree antics of otters and other playful creatures, you’ll rediscover your own sense of fun.

When was the last time you did something unexpected or stepped out of your routine? When there’s too much going on, we operate on autopilot. Same meal, same time, same schedule, same…insanity. Break out of the rut! Have a picnic in the park during your lunch hour. Have breakfast for supper. Take a different route home. Just by changing a few little things, you’ll lift your head up and start looking around again.

And of course, when all else fails, start saying “no” to things. But that’s a story for another blog.

In the meantime, get an otter attitude! Go play!

I’d love to hear what you do when life gets crazy. Would you let me know? I’m always looking for new ideas.