As we approached the town of Heudin, Romania, we started seeing the oddest looking-buildings. Half-finished mansions dotted both sides of the two-lane highway, most looking like they were abandoned quite a few years before. The closer we got to Heudin, the more of them we saw. Oddly enough, they were generally similar in style. Made of concrete, the half-finished buildings stood four and five stories tall, complete with ornate trim and half-round window cut-outs. Whoever started them clearly had big plans.

On many, the roofs were the only completed portions. The tiles gleamed in blinding silver or brilliant blue—so obviously different from the surrounding buildings, you couldn’t help but notice.

If you looked closely, some even had the round Mercedes symbol on the tops of the turrets. 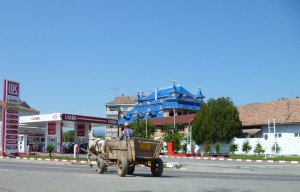 When we asked, residents told us they were Gypsy Palaces and could be found all over Romania. Though the gypsy people stopped traveling many years ago, they are still struggling to fit into the culture. Often distrusted and looked down on, they figured the Palaces were a way they could finally make their mark.

Only somewhere down the line, they lost interest in showing off and keeping up appearances–as the abandoned buildings attest. We saw some Palaces that were almost finished, but were told that was usually only on the outside. The inside was still an empty shell.

In others, the owners live in one small room on the first floor–or in the small rundown cottage out back. It’s what they’re used to; what they’re comfortable with.

Aren’t we just like that at times? We start a project because we think we ‘should.’ We drive a certain vehicle, buy a house in a certain neighborhood, apply for a certain job…all for the sake of appearances.

It can be tempting to let others’ successes dictate our creative choices, too. ‘I should write a [fill in the blank] story, because they’re popular right now….Self-publishing is the way to go…or maybe I should…’ 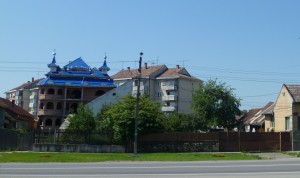 When you find yourself eyeing someone’s Gypsy Palace, take a moment to stop and think. Make choices based on the dreams God has planted in your heart—not someone else’s.

You don’t want to wake up one day and find yourself living in someone else’s half-finished mansion.

Have you ever found yourself building a “mansion” you didn’t really want to live in? I’d love to hear what you think.