I am so SO excited that HIDDEN THREAT will be available on May 30th! I can’t wait to hear what you think of this story. (You can pre-order it now from Amazon in print, e-book or audio.) Isn’t the cover gorgeous? Waterfall Press does amazing covers! 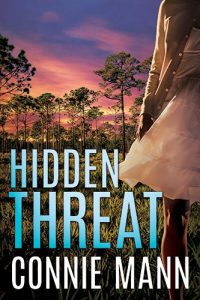 Release day is May 30th!

Here’s the back cover copy. (Keep reading for a sneak peek at chapter 1, below.)

An environmental crisis is the last thing clean-water crusader Eve Jackson expected in her hometown. She’s used to taking on powerful DC politicians in her fight, but when a baby in Safe Harbor, Florida, shows mysterious signs of possible poisoning, the danger hits painfully close to home, stirring memories of her own mother’s death.

Eve’s search leads her to the Sutton Ranch, now run by her high school crush, Cole. Focused on keeping the family ranch afloat as a series of deformed calves are born to his herd, Cole has no time for Eve’s crusade. But as her unwelcome questioning ostracizes her from locals, Cole’s irritation turns to intrigue—not only about the source of the poisoned water but also the tenacious, loyal, and passionate woman determined to help.

As Eve digs deeper into Cole’s operation, she sees her suspicions in Sutton Ranch may be misplaced. Yet she can’t shake the feeling that his ranch, and perhaps his past, hold the answers she seeks. When the sabotage escalates, the two must work together to uncover the culprit—if they can survive the investigation.

Don’t miss the Goodreads Giveaway going on now. Enter for your chance to win a FREE e-book copy. But hurry, it ends on May 30th! Click here to enter.

Here’s an excerpt of Chapter 1 of HIDDEN THREAT

Eve Jackson crouched in the mud outside the chain-link fence and wished she’d worn different shoes. Wet sludge oozed into her new ankle boots and her fingers were numb, but a niggle of excitement bubbled up just the same. If her informant’s tip panned out, she’d finally have the proof she needed to nail this company for contaminating the nearby stream. She’d been after them for almost a year but had never been able to come up with hard evidence. If she got it this morning, every shivering minute would be worth it. Nobody messed with the water supply and made children sick, doggone it. Not if she was around to stop it.

She lowered the viewfinder on her brand-new digital camera and rubbed her arms in the predawn light. She’d grabbed her peacoat on the way out the door, but the heavy wool was no match for a cold, damp stakeout, never mind that it was already March. She hadn’t expected the sudden downpour as she’d driven to this sleepy little town in the Virginia countryside, either.

She’d been staked out behind the aging warehouse for almost three hours. Her cramped muscles were beyond stiff, and she would have traded her left arm for a cup of coffee and a hot bath. Nothing and no one had moved since she’d arrived.

She shifted position and wobbled. She flailed her arms and grabbed the fence just before she landed backward in the mud. The camera strap yanked her neck as the camera smacked her chest, but at least it stayed out of the mud. By the time she steadied herself, she was breathing hard, wondering if this would prove to be yet another wasted night.

Several minutes later, her head snapped up when she heard the distinctive rumble of a diesel engine firing up nearby.

Her heart rate quickened as she raised her camera and zoomed in on the activity near the warehouse. Several more trucks rumbled down the dirt road from the main highway. All of them tankers.

Oh yeah. We’ve got you now.

Here’s the link again if you want to grab your copy now on Amazon. I do hope you’ll let me know what you think of Eve and Cole’s story.