If you were one of Jesus’ disciples, the week between Palm Sunday and Easter was an emotional roller coaster none of them ever expected or anticipated. On Palm Sunday, Jesus rode into town on a huge wave of excitement from the cheering crowds. They lined the path with palm fronds, hopeful and triumphant and ready to usher in a new King, a new day, their deliverance from Roman rule. The disciples were swept along, excited and eager to be part of the miraculous changes that were coming.

But by Friday, everything had changed. Jesus had been betrayed by one of his own, arrested and sentenced to death. Now the same crowds that had cheered on Sunday were waving their fists, yelling, “Crucify Him! Crucify Him!”

I imagine those big burly fishermen trying to get a grip on their tempers. I can see them plotting to break Jesus out of jail—or at least, smacking a few heads together to knock some sense into those Roman idiots. But they weren’t sure if that’s what Jesus wanted. Their confidence shattered and they milled around, confused, anxious, afraid. They thought they were on the winning side. They had believed–with everything in them—that Jesus was the long-awaited Messiah, the one who would save them.

How could He do that if He were dead? 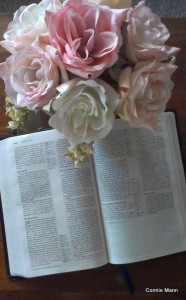 For many of us, we’ve heard the story so often, we’ve forgotten that the characters who lived it were real people, people just like us. Imagine the fear and questions running through their hearts and minds. Jesus had been arrested, and even though he’d been found guilty of nothing, he was going to die. And there wasn’t a thing anyone could do to stop it.

What if you were Peter, or John, or Mary, Jesus’ mother, following your son up that hill as he carried his own cross toCalvary? The pounding of the nails, the cries of pain, and then, the utter darkness that descended after Jesus’ final words. “It is finished.”

They looked at each other in shock, with no idea what to do next. Jesus was dead, and now they were taking his body to a borrowed tomb. What now? They finally admitted defeat and wandered home, wondering what to do next, how to keep going.

They were at the lowest point in every good story: the point where all is lost. Victory had been snatched from their grasp. Hope was gone. There was nothing left but darkness.

Those next few days, from Friday to Sunday, passed on leaden feet, wrapped a fog of grief and confusion.

When the women trudged to the tomb early that long-ago Easter Sunday morning, they never in their wildest dreams expected to meet an angel, asking why they were looking for the living among the dead. “He’s alive,” the Angel said. “Just as he said.”

Jesus conquered the grave, paid the price for all our screw-ups, and lives today, ready to walk beside us. It is the ultimate do-over, the most amazing second chance any of us could ever ask for. Do we deserve it? No, but He offers it anyway.

This Holy Week, if things seem dark and stormy and all hope seems lost, don’t despair—there is hope! Jesus is alive and He offers you—and every single person on this planet—a fresh start, a do-over, a chance to begin again!

And that’s the greatest story that has ever been told!

He lives! And we’ll never be the same!