At this time of year, ghosts, goblins and ghouls seem to lurk behind every bush and on every television commercial. But for those of us trying to create something, those monsters don’t just appear at the end of October. We battle them every single day of the year.

You know them, even if you’ve tried to ignore them. My critique partner and I call them Doubt Gremlins. Others call them demons. In his book, The War of Art, author Steven Pressfield named them resistance.

They’re the sneaky ghosts that slide up behind you and whisper terrifying things in your ear. “Who do you think you are?” they ask. “You have no talent. You’ll never succeed. Why try?” they wonder.

The longer we listen, the tighter their tentacles wrap around us. Eventually, our creativity is tied so tight we fear we’ll ever break free again.

Here are three steps to trap your creative demons.

We have to stop running from our gremlins long enough to see them. According to Craig English in his article, “Set Your Writing Free,” (The Writer, October 2012) we can’t confront our demons until we face the avoidance techniques they hide behind. Incessant Facebook checking? Too many distractions?

Turn on the light and shine it into the dark corners of your mind. That’s where the gremlins lurk. Step one is admitting they’re there.

Next, we have to get up-close-and-personal with our monsters. Throw a rope around that scary demon and look him in the eye. Name him. One of my scariest gremlins is named: fear. Sometimes I’m fleeing fear of failure. Other times, I battle his evil cousin, fear of success. But when I look them in the eye and call them by name, their power diminishes. Once I name them, I can figure out ways to defeat them. 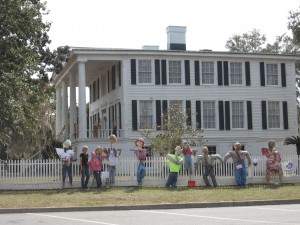 Hiding amongst the scarecrows

Stomp them with progress

Nothing silences the doubt gremlins like action. Dare to move forward–despite their presence. If you’re a writer, join National Novel Writing Month (NaNoWriMo). The goal is to write a complete 50,000-word novel during the month of November. It doesn’t have to be any good. It just has to get out of your head and onto the page. I’ll be joining in again this year. It’s one of the ways I give my demons a swift kick in the rear. To join, go to National Novel Writing Month and sign up.

Okay, I have to be honest. The doubt gremlins will never go away, not completely. About the time we think we have them tied up and banished forever, they launch another attack. Use the above steps to keep them contained. Then accept that they are part of the creative journey and take that next step anyway. When we make forward progress, they run and hide.

What strategies do you use to trap your gremlins?

Are you joining NaNoWriMo this year? Let’s do it together and kick those gremlins to the curb.